The Race for a Vaccine 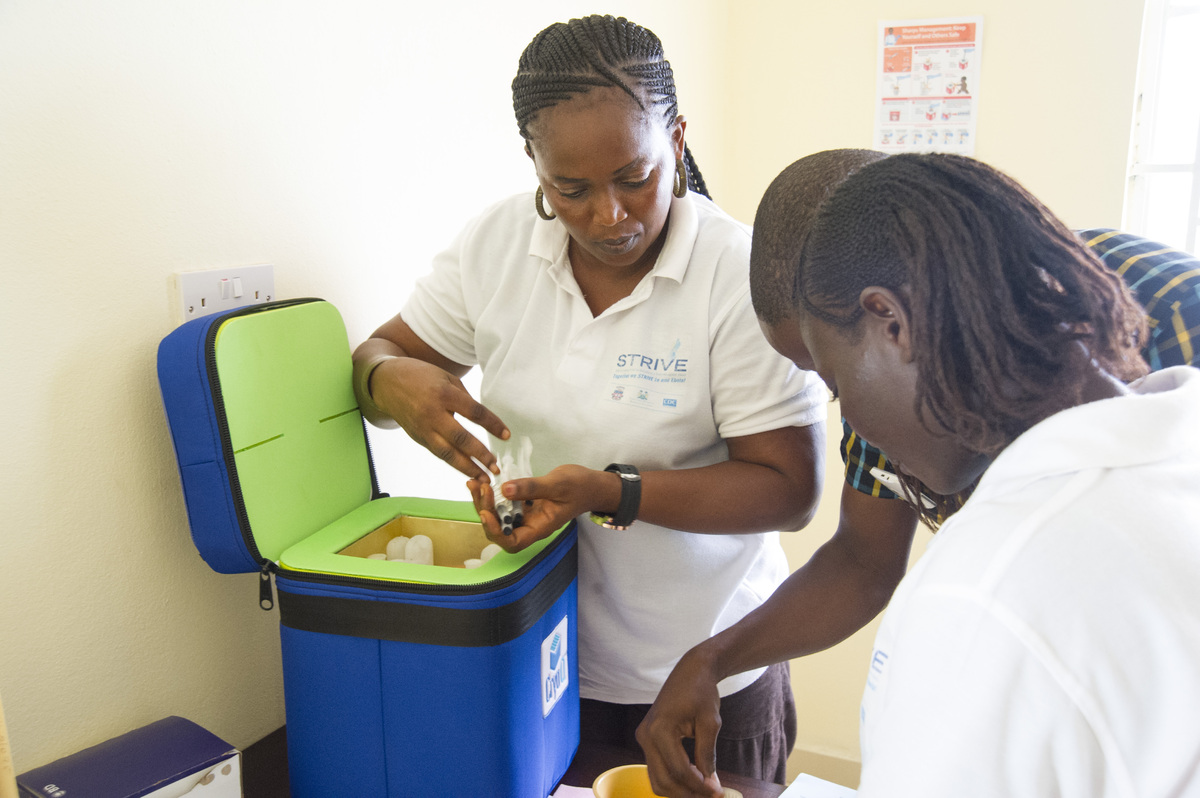 The Race for an Ebola Vaccine

By late October, 2014, there were already 10,000 cases of Ebola. Half of the people infected died. The number of cases and deaths were continuing to rise. Many experts thought a vaccine may be the only thing to stop the outbreak. But vaccine development can take years—time that West Africa did not have.

WHO held an emergency meeting with experts from around the world to find a solution. These experts agreed to go ahead with clinical trials as quickly as possible. Within a week, CDC staff was in Sierra Leone as a member of the team planning the STRIVE vaccine clinical trial.

Large trials of the same vaccine studied in STRIVE were also conducted in Guinea and Liberia. The three trials used different approaches to study the vaccine, and all produced important information. 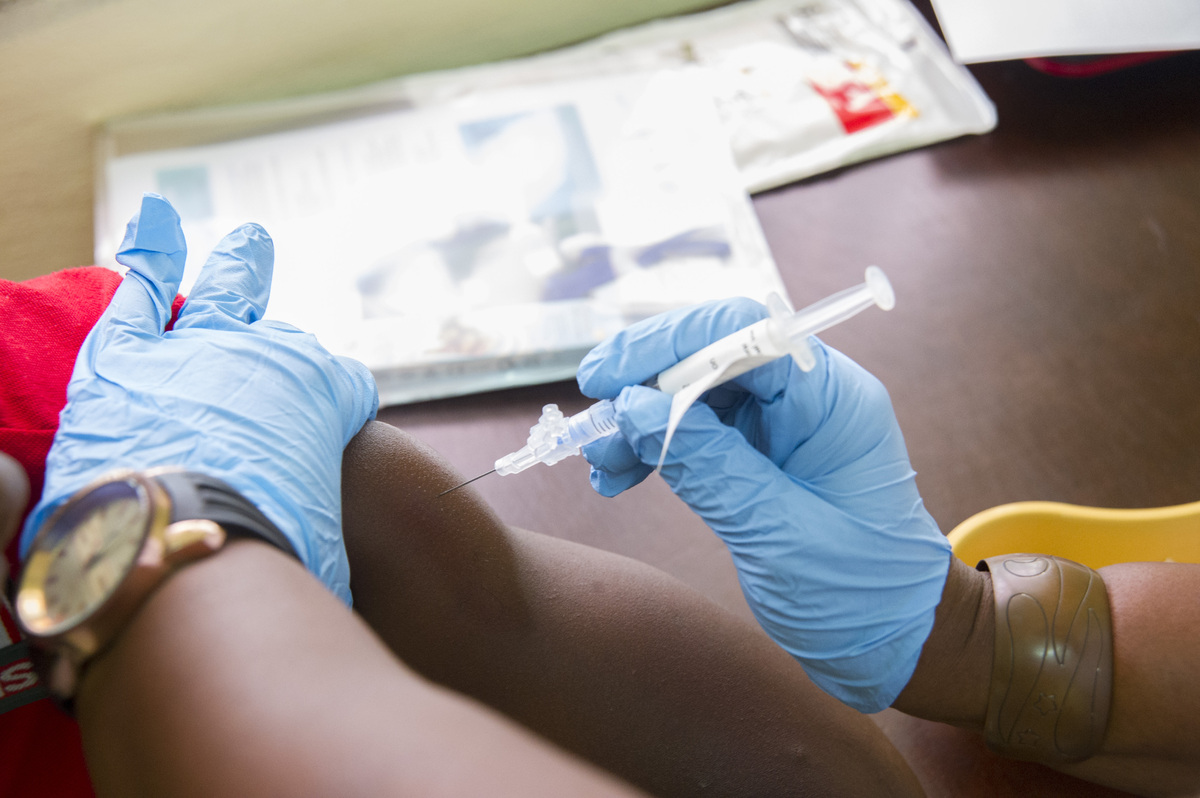 STRIVE: CDC’s Role in the Race for a Vaccine

Launched in April, 2015, the Sierra Leone Trial to Introduce a Vaccine against Ebola (STRIVE) was a collaboration with CDC, the Sierra Leone College of Medicine and Allied Health Sciences, and the country’s Ministry of Health and Sanitation. The vaccine trial tested an Ebola vaccine among healthcare and other frontline workers in five districts of Sierra Leone that had been heavily affected by the outbreak.

This vaccine might be an important part of the Ebola prevention toolkit that public health officials and the world are so eager for. The study also strengthened research in Sierra Leone’s institutions by providing training and research experience to hundreds of Sierra Leonean staff. Other parts of STRIVE’s work will also live on for the future, such as renovating old structures and building new ones to enroll and vaccinate participants, handle data management, and store the vaccine.

On April 9, 2015, the first person in Sierra Leone received the vaccine. More than 8,650 healthcare and frontline workers enrolled in STRIVE. By the end of the trial, about 8,000 people were vaccinated. 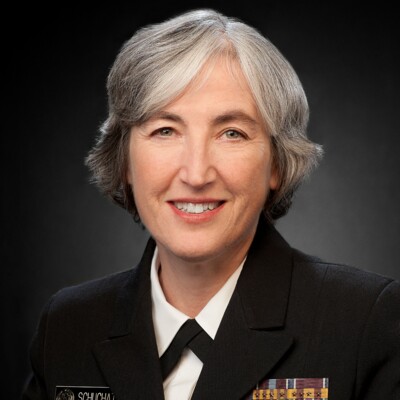 Dr. Anne Schuchat, who oversaw STRIVE from the CDC side, discusses the many decisions that went into planning for the vaccine trial. (Transcript) 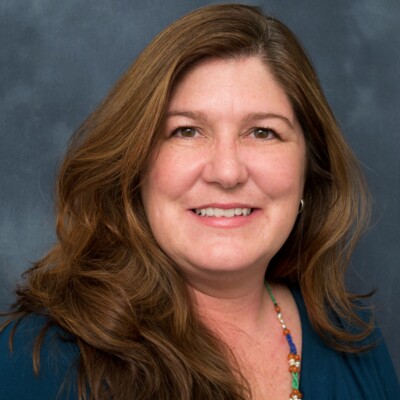 Amy Callis describes her role as head of communication and social mobilization for STRIVE in Sierra Leone. (Transcript) 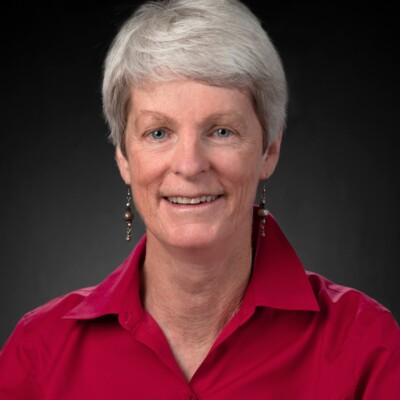 STRIVE regularly talked to local community leaders in each of the districts. These conversations began months before the STRIVE started and continued every six weeks. As a result, STRIVE had a very strong relationship with the community. 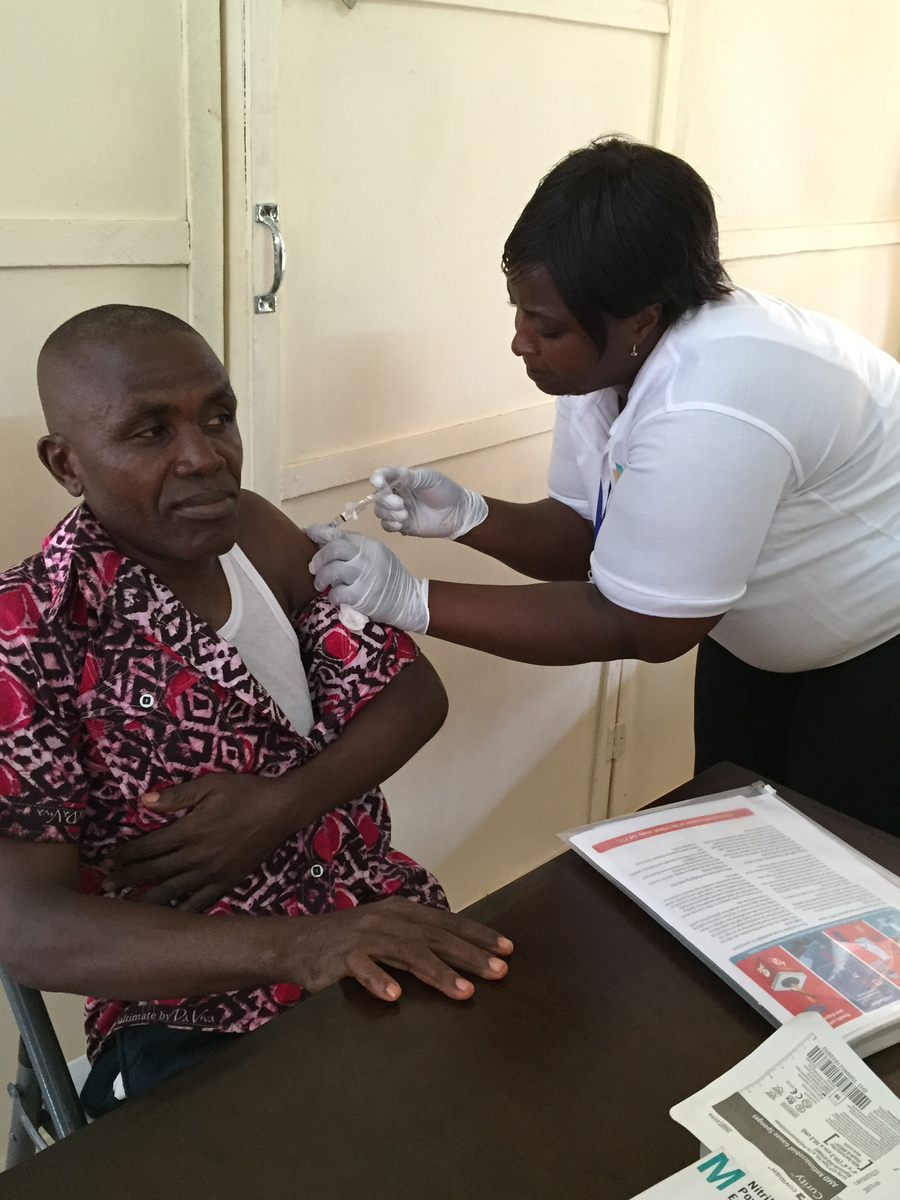 The first vaccine given at the vaccination site in Tonkolili, Sierra Leone, May 4, 2015 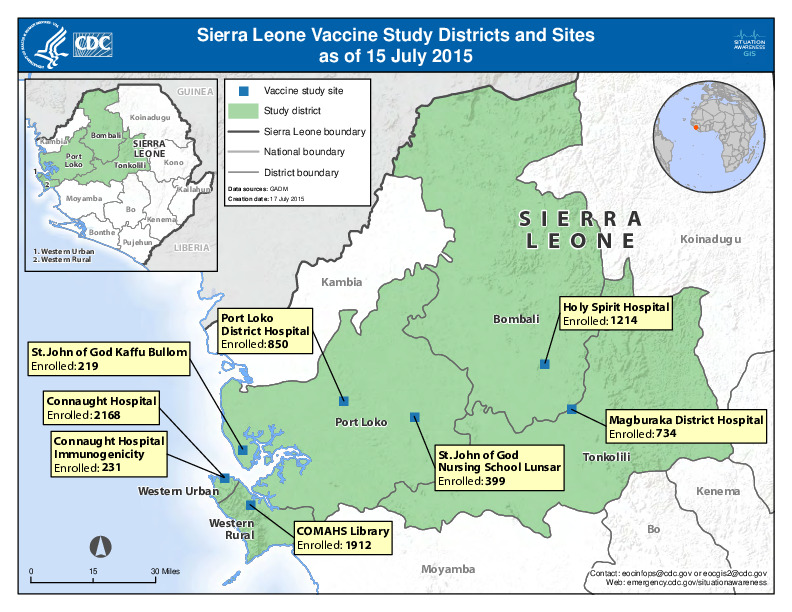 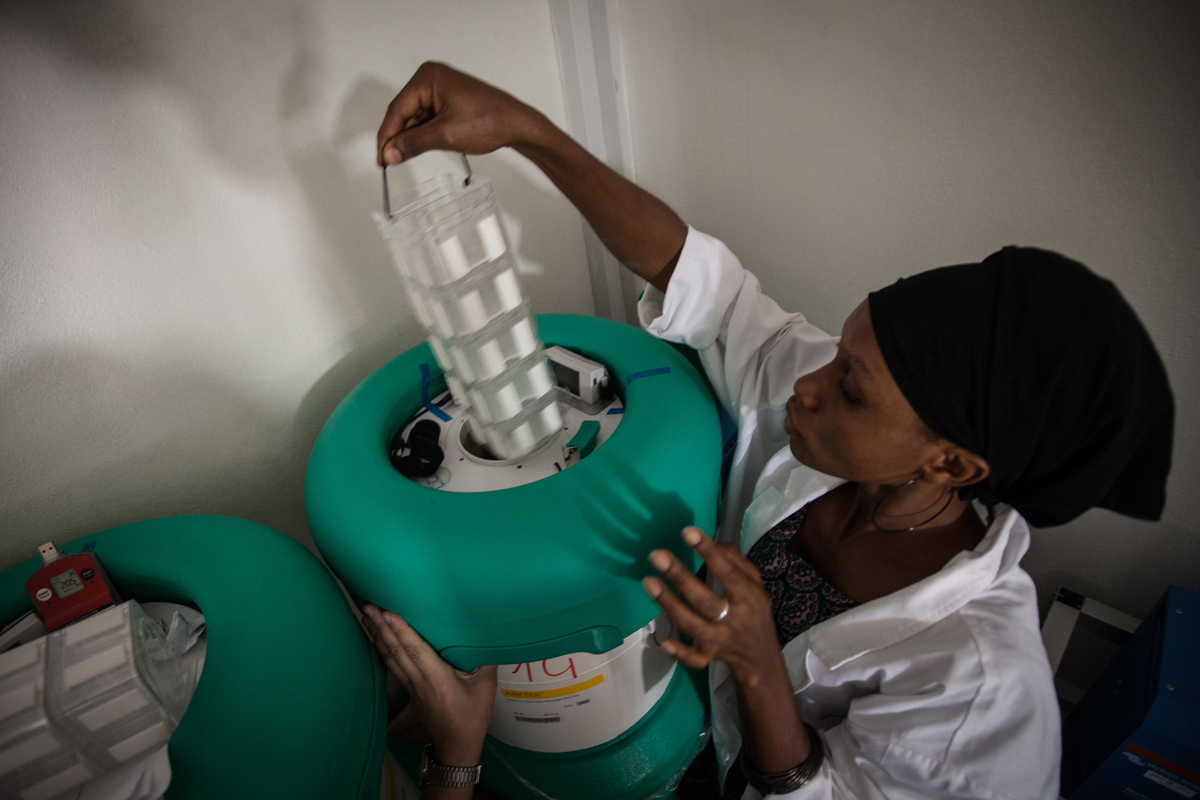 Arktek™cold storage vaccine storage device in use during the Ebola vaccine trials in Guinea, June 29, 2015. Photograph by Sean Hawkey

The Global Good Fund—a joint project between the Bill and Melinda Gates Foundation and Intellectual Ventures—donated dozens of Arkteks™ to the vaccine trials in Guinea and Sierra Leone.

To reliably achieve the required temperatures for Ebola vaccines, the Global Good Fund modified its Arktek™ PSD device—a storage device that keeps vaccines cold for over a month with no power required. The Ebola vaccine needed to be stored at much lower temperatures (-76 to 112 degrees Fahrenheit/-60 to-80 degrees Celsius) than licensed vaccines. 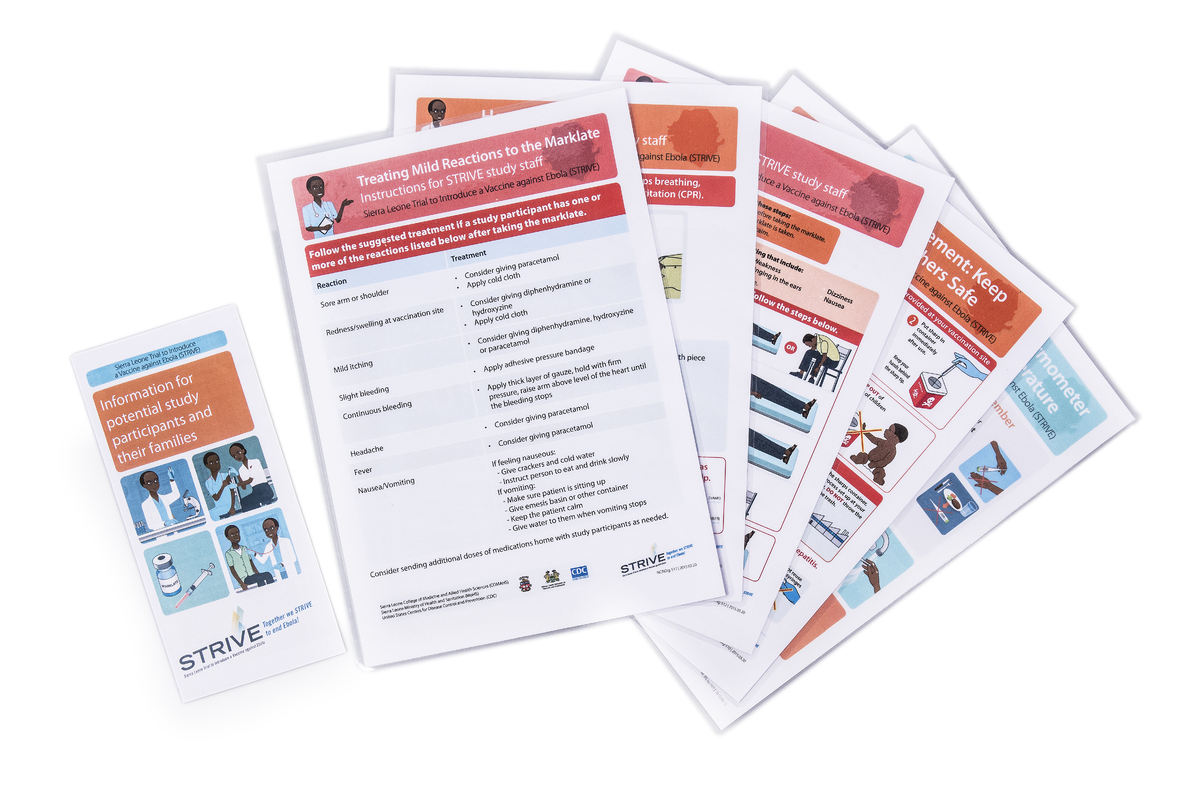 Launched in early 2015, The Partnership for Research on Ebola Vaccines in Liberia or PREVAIL was a partnership between the Liberian Government and the U.S. National Institutes of Health (NIH). This clinical trial of about 1500 participants assessed the safety and immune response of two vaccine candidates called rVSV-ZEBOV and ChAd3. 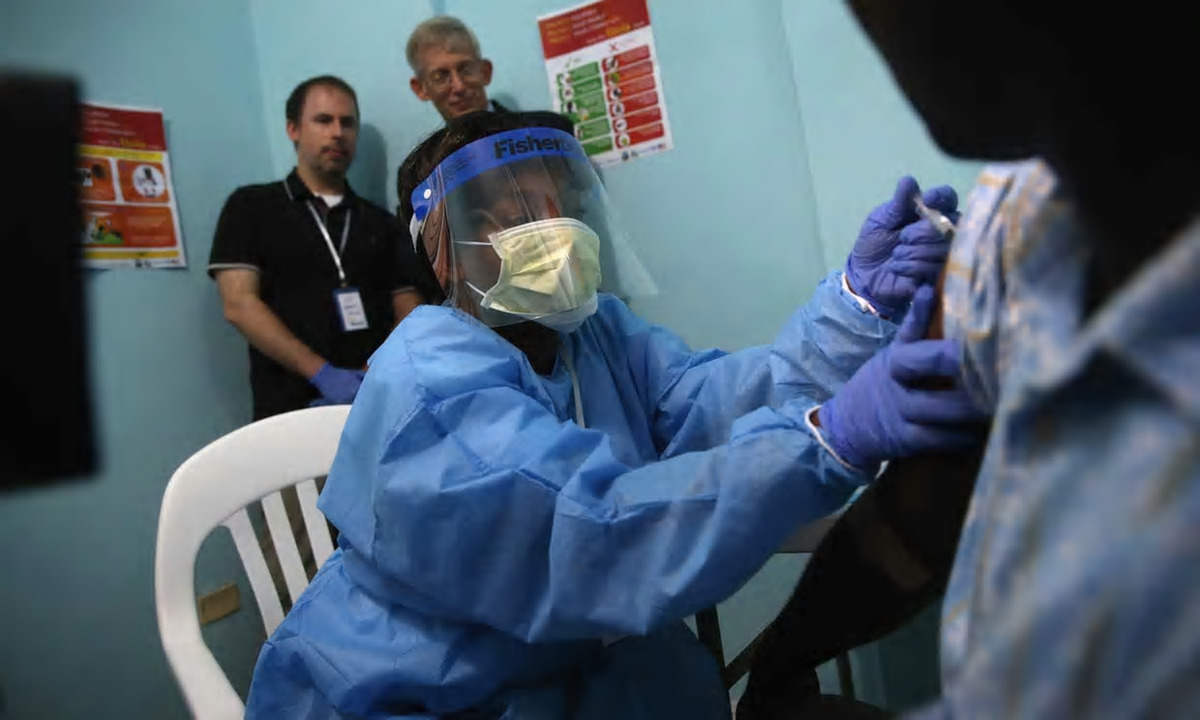 Here a nurse delivers the first vaccination of the PREVAIL trial on February 2, 2015 at Redemption Hospital in Monrovia. Photograph by John Moore, Getty Images

The three vaccine trials conducted during the 2014-2016 West Africa Ebola outbreak, including the STRIVE trial in Sierra Leone, generated information about the safety, efficacy, and immune responses produced by various Ebola vaccine candidates. The information collected about the rVSV-ZEBOV vaccine, in this trial and others, helped inform the FDA’s decision to license it as Ervebo© in December 2019. This decision made it the first vaccine ever licensed to protect against Ebola.

This vaccine has and will continue to be a vital tool to help save lives during Ebola outbreaks.

← Wash Your Hands!
Research and Innovations →
4. The Role of Public Health in the Epidemic
The Race for a Vaccine