2018 Democratic Republic of the Congo Outbreak 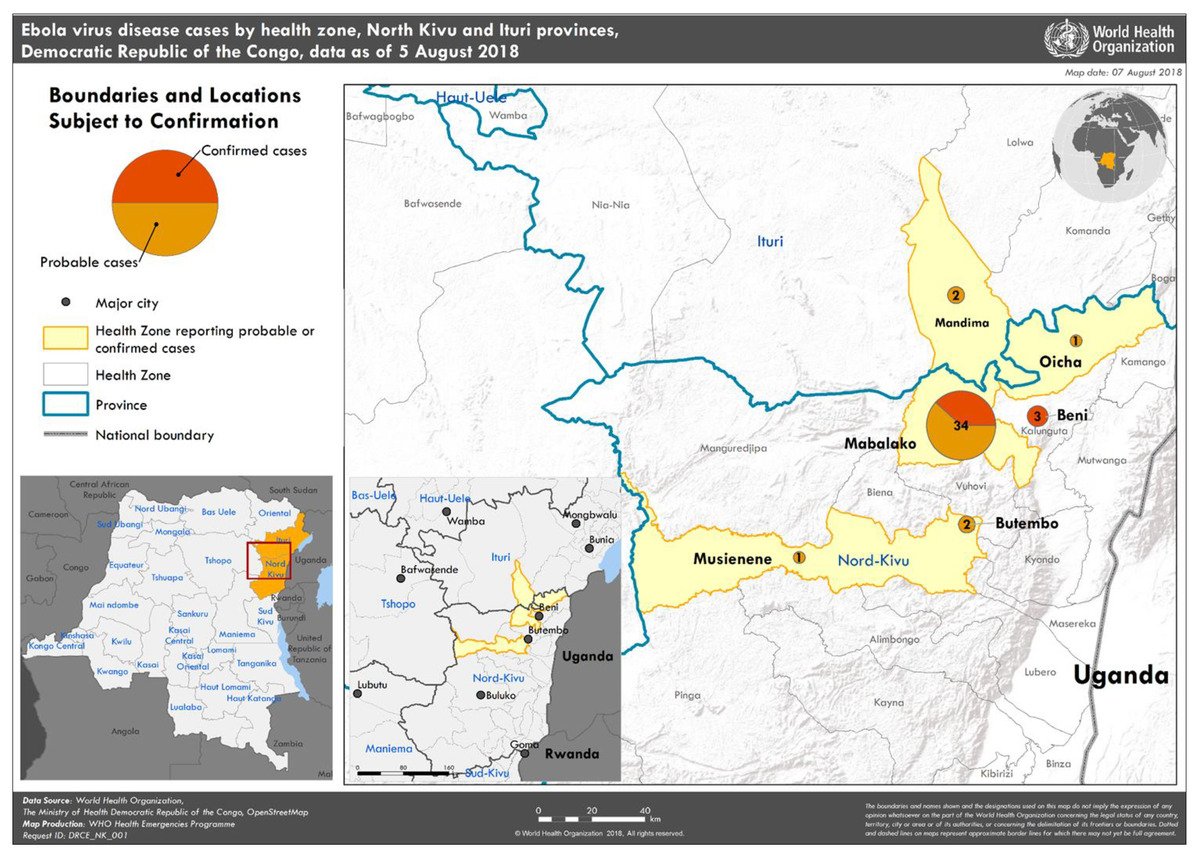 The lessons learned from the West Africa Ebola epidemic were soon put to the test. On August 1, 2018, the Ministry of Health of the Democratic Republic of the Congo (DRC) declared an outbreak in the North Kivu Province, the 10th Ebola outbreak in the DRC since the discovery of the virus. This came just eight days after the World Health Organization (WHO)announced the end of an outbreak in the Bikoro region of the country’s Equateur Province.

The ongoing North Kivu outbreak became the second largest in history with more than 1,600 confirmed cases and nearly 1,100 confirmed deaths as of May 15, 2019. The virus disproportionately affected women (55% of cases) and children (28% of cases), and the 67% fatality rate gravely impacted the region. Despite mounting concerns, WHO stated that the outbreak did not constitute a public health emergency of international concern because it was contained within DRC’s borders.

The global community was quick to respond to this new outbreak. WHO, criticized for a delayed reaction to the West African epidemic, swiftly employed its Health Emergencies Programme. This department was created in 2016 to provide centralized leadership and coordination of international response to contain disease outbreaks and aid in the recovery of affected regions. Scientific knowledge and advancements gained from the outbreak in West Africa also proved effective in DRC. The deployment of tested vaccines from the 2014-16 outbreak as well as an experimental vaccine played an essential role in prevention efforts. The ring vaccination strategy was used to vaccinate and monitor individuals who had been in contact with an Ebola case victim in the hopes of preventing spread of the disease.

The situation in DRC posed its own set of challenges for Ebola responders. The conflict-ridden region presented security concerns not only for the affected communities but also for frontline healthcare workers. The outbreak was located in the middle of an ongoing war zone, which significantly limited the ability of responders to slow the rate of transmission and contain the disease. There were numerous attacks on treatment centers, forcing the evacuation of medical staff and the suspension of activities. The threat of violence impeded access to certain communities, and therefore restricted the ability to deliver treatment, perform surveillance or educate people about Ebola.

As a result, communities were instilled with a deep sense of fear and distrust. Responders to the West Africa epidemic faced similar suspicion and learned that community engagement remains essential to combatting Ebola. Even with that knowledge, the circumstances of the DRC outbreak made it difficult to put that learning into practice.

Due to hostilities in the region, armed police were used to force compliance with health measures, and elections were cancelled, which further escalated political tensions. Many believed that Ebola was fake news or a ploy by the international community to influence local government or extract resources. This distrust was aggravated by the fact that the global response was specific to Ebola, not addressing other long-term endemic diseases such as malaria.

Healthcare workers noted that the majority of confirmed cases were a result of community deaths. This demonstrates that people were either unaware or unwilling to seek care from treatment centers. It became critical that the international response focus on community outreach to develop culturally appropriate strategies for treatment and prevention in order to avoid repeating the mistakes of the West Africa outbreak.
End of the Outbreak

Despite numerous challenges, the tenth DRC Ebola outbreak was declared over on June 25, 2020. Lessons learned from the West Africa epidemic were successfully utilized in the Kivu outbreak: for example, many of the methods used for infection prevention and control during the 2014-16 West Africa epidemic were applied to the Kivu Prefecture outbreak. However, many of the same problems also occurred: some burials became “super-spreading events”; burial teams were viewed with fear and anger; and community transmission was the primary means of spreading Ebola. On the other hand, the success of the vaccine trials during the West African epidemic led to widespread vaccinations in DRC, potentially saving many lives.

Other lessons from the West Africa epidemic was applied, including the development of health communication aids, video messages and other tools. Likewise, CDC also provided technical and laboratory support for the outbreak, increased capacity building, and deployed staff members to coordinate and advise. On the domestic end, CDC continued its efforts in training and preparing United States healthcare facilities and customs officers for possible cases of Ebola; luckily, the one possible American case proved to not be Ebola.

Ultimately, there were nearly 3500 suspected and confirmed cases of Ebola in Democratic Republic of Congo Ebola outbreak, which led to 2266 deaths; the outbreak also spread to Uganda, killing four. Nevertheless, a separate outbreak began in Équateur Province in early June 2020—the eleventh outbreak of Ebola in the country. This means that the country of the Democratic Republic of the Congo continues to struggle with the effects of Ebola viral disease.

In this September 2019 photo, CDC and the Public Health Agency of Canada staff gather in CDC’s office in Goma, Democratic Republic of Congo (DRC). The office was the hub for CDC staff supporting the response to the outbreak of Ebola virus disease in the DRC.