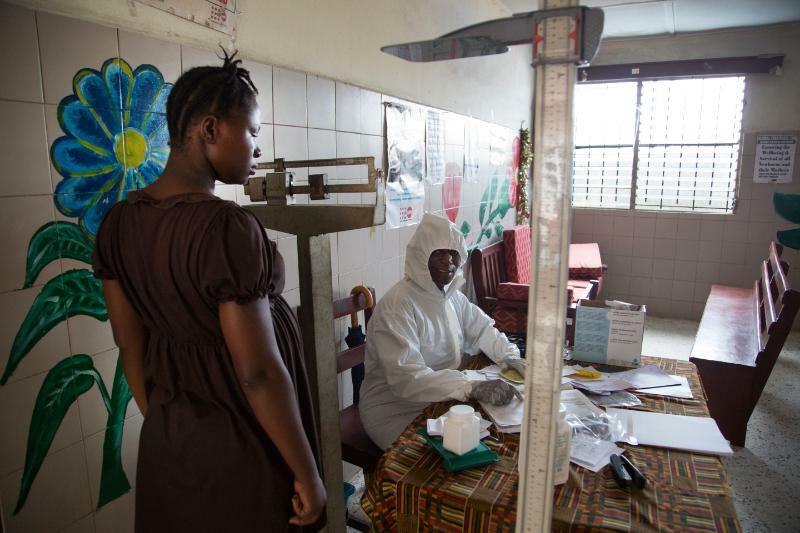 Directly and indirectly, women were disproportionately impacted by the Ebola epidemic because of their central roles in caregiving, production, and trade activities. Before the epidemic, the three countries were long ranked among the world’s worst for maternal and infant health, although gains had been made in the previous decade. With the health system in shambles during the Ebola epidemic, many pregnant women avoided the poorly-equipped clinics and hospitals for fear of contracting the virus and other diseases. Consequently, many pregnant women and children died for lack of attention and intervention. In post-recovery, concerted efforts were made to improve maternal and infant health.

In the above photo, a health worker wearing personal protective equipment conducts a routine pre-natal examination of a pregnant woman at a healthcare facility in the West Point neighborhood of Monrovia, Liberia while the community was under quarantine on August 28, 2014. She was fortunate to have received some pre-natal care at the height of the Ebola epidemic.

In an effort not to repeat what occurred during the 2014-2016 Ebola epidemic, health care providers, NGOs and the Ministries of Health are working to assure women throughout the region that they can safely receive maternal health care during the COVID-19 pandemic.

← Impact on Children
7. Preventing Wider Spread in West Africa →
6. The Aftermath of the Epidemic
Rebuilding after the Ebola Crisis
Impact on Women